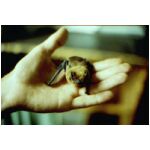 A young Noctule in Nick's hand, it was caught by its wing membrane near its foot, on a single spike of a barbed wire fence, and had twisted its self so much it had acted like a tourniquet, and the little bit of skin was dry :( It survived and flew off happily :-) 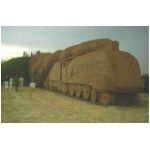 The brick train at Darlington, which is hollow and has bat bricks. I will get some more picture to add later. 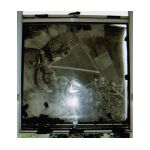 I was travelling back from a wedding in Scotland when my mobile phone rang. "We've got bats in a window" ! I couldn't understand how the bats had got between the panes of glass. As you might be able to see, the window was the old type where there is a single piece of glass in an aluminium frame, and there are two of these that slide past each other virtically, leaving about 15 millimetres between the pieces of glass. This is just the sort of gap a Pipestrelle bat likes, and you've guessed it, there were nearly 60 in there. There were about 20 more in the corridor that this window was at the end of, and you have guessed it again, this was the bedroom block for the troops, they were terrified of the tiny bats !

The British Wildlife and Countryside Act 1981, makes it an offense to disturb, handle or kill bats and their roosts.
It is OK to rescue them though :-) See below...

If you want more info, have a look at the Bat Conservation Trust site, click on the bats header on this page, or anywhere you see the flapping bat :)

You might want to have a look at a the sites of my local bat groups: -
The North Yorkshire bat group pages.
or
The Durham bat group pages
Both of which I am a member :-)
If you'd like to try to encourage some bats to live on your property,
Click here to go to the BCT bat box page.

In the summer if you have found a small bat it might feel cold to the touch, this is normal :-)
Bats reduce their body temperature, as well as their breathing and pulse rate, so that they can save the tiny resources they have got from the 3000 or so insects they have eaten during the night. Sometimes a bat lands somewhere where the sun can't warm it up so it stays there for some days. You can pick up the bat and put it in something like a shoe box or plastic small animal box, hang a sheet of paper towel down the side and use something small like the top of a photographic film cassette to put water in.
Trap the paper towel with the lid, so that the bat can hang down from the paper towel, mind you don't trap the bats feet in the lid as it hangs there :( Don't make any extra holes in the top of the box, bats only need a hole as big as the end joint of your finger to escape ;-o there will be enough air getting in anyway.
If you feel brave enough, - some people are scared stupid by bats for some reason ;) - when it gets to sunset just cup your hands together in a ball to warm the bat, and after about 5 minutes or so you should feel it shivering :) Take it outside and hold the bat up on the palm of the hand as high as you can reach. It will probably crawl around on your hand and possibly hang from your fingers before flying away (if it can, or wants to). It will usually drop a foot or two to gain air speed. If it's injured it might just sit there liking the warmth of your hand, though if it tries to fly it'll probably fall to the ground, so do the above over some grass !
If it does fall to the ground, or is very obviously injured, in England contact English Nature, they're phone number's in the phone book, - it could well be the same sort of thing in Wales or Scotland or Ireland, - or click on the Bats header of this page and it'll take you to the BCT web site, from where you'll find your local bat group :-)
I don't know about other countries, sorry, try searching using your favourite search engine?

If you are a gardener, then why not have a look at my Garden for Bats page for some ideas of what plants and other things might help attract bats into your garden :-)

I've quoted someone else's thoughts on why do bats hang up-side-down?

For those of you trying to keep bats, there is a company that sell mealworms, surprisingly called The Mealworm Company, - as you will see, they don't just do meal worms :)

Here you will find a table I have produced that will help you decide what species of bat you are looking at.

It might interest you to have a look at some pages about the complexities of maintaining roosting holes in small bridges, - this was produced in Northern Ireland in about 1988.

I have produce a Word 2 version of the English Nature Roost Visit Report Form, also an auto fill Word 9x version as a template which is zipped and will extract to the right folder.